Shot Contribution and Shots Per Key Pass: An Introduction

A soccer team will average between 10 to 20 shots per game.  These attempts run the gamut from the highly speculative 30 yard bomb to a one-on-one breakaway with only the keeper to beat.  The quality of these shots aside, we know that you need to score goals to win a game and that shots are highly correlated with goals.  Great, so everyone agrees that shots are important.  But how do we allocate credit for a shot created?

A combination of factors are at play (in roughly ascending order): team shape/game state/talent disparity, player(s) who win initial possession, player(s) involved in lead-up to shot, player(s) responsible for "key pass" (shot assist), and finally the player who actually takes the shot.  Obviously, many shots don't have that many actors involved but it gives one an idea of how difficult it is to attribute credit for a shot.  Of all of those factors, the two most important are the player responsible for the "key pass" (shot assist) and the person taking the shot.  Luckily for us there are stats for each: key passes and shots.

I think it is easy for many people to dismiss shots and/or key passes because - taken at their face - these metrics don't take into account the quality of the shot taken or created.  While a fair criticism, these people grossly underestimate the amount of skill required to create shots, both for yourself and for others, irregardless of their quality.

Shots and key passes are not immutable stats to be divvied up among a team's strikers and creative midfielders.  Good players have the ability to create something out of nothing and take a team's attack to another level.  That is what Shot Contribution aims to measure.  Of course it is self-evident that adding shot quality to this metric would only increase its accuracy as a measure, but its absence does not invalidate it.

Attacking players fill different roles on a team; some are shooters/finishers, some are providers/creators, and some are a balance of both.  Shots Per Key Pass is a ratio that aims to provide a framework for categorizing attackers.  Since shots greatly outnumber key passes (not every shot has an assist) you can generally categorize a ratio of two shots or more per key pass as a "shooter," a ratio between one and two as "balanced," and a ratio less than one as a "provider."

As an example, even though Luis Suarez attempted the most shots in the EPL (almost six a game) he also had nearly three key passes a game, near the league lead.  His ratio of 2.1 would place him in the "shooter" category, but only just barely.  His high number of key passes demonstrates that he likely could be used in a more flexible tactical role if called upon.  Demba Ba, on the other hand, has a Shots Per Key Pass ratio of 7.5, easily the highest of the top 40 shot contributors in the league.  This raises serious questions about the Chelsea striker's tactical flexibility as he is basically a black hole of shooting if he sees the ball anywhere near goal.

Below you will find a ranking of EPL players (12/13 season) by Shots Contributed (per 90 minutes).  Each player has also been labeled "shooter," "balanced," or "provider" depending on their Shots Per Key Pass ratio. 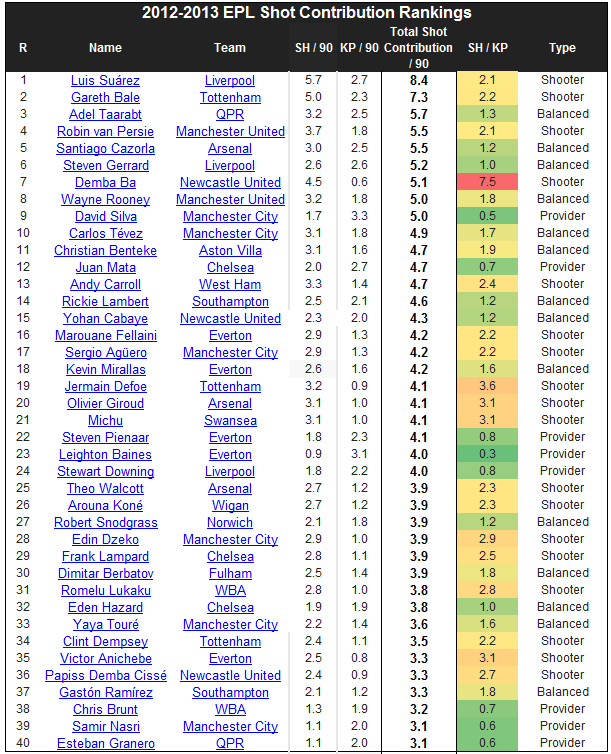